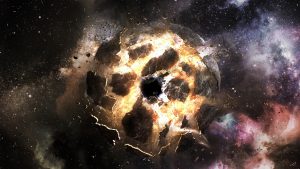 “These readings are impossible,” Ezarra said, her body thrumming with tension. “The sensors indicate that the debris is not even chemically compatible. It’s as though several vastly different planets exploded here, not just our home. Something happened when our weapons combined. Xeres wasn’t just destroyed, the basic building blocks of the planet were warped into incompatible elements.” END_OF_DOCUMENT_TOKEN_TO_BE_REPLACED