This story was written several years ago for the prompts: Barn, Bossy Team Leader, One More. When we edited the story before posting it, we found that our voice and timing had grown substantially. The changes in word count moved the story from flash fiction to short story in length (over 1000 words). Also, I think we made it funnier! 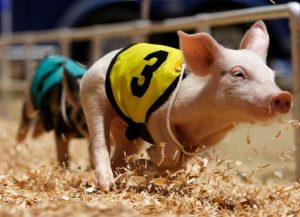 Jackson Stevens sidled into the conference room, juggling his laptop and morning espresso. He shoved the door with his elbow and headed for the only vacant chair at the table: right next to his bossy team leader.

Killian Porter, Director of Programming for their all-reality cable network, glared at him, pointing to the still half-open door.

“I know your show’s about farm animals, but were you born in a barn?”

“Oh, sorry, sir,” he said, hastily using his shoulder to close the door.

His boss was a large man who seemed to be stuffed into his suit. The man positively fumed while watching Jackson boot up his laptop. The rest of the room waited silently.

Once he’d finished fussing with the machine, Killian stabbed a finger at him. “That’s one more strike against you, Jackson.”

“Since you finally decided to join us,” he said with an exaggerated tone of politeness, “would you care to update us on the overnight figures for your show?”

“W…w…well, sir, the overnights are great for Hog Wild. Our new show seems to have hit the key demographics hard.” Jackson smiled at his boss. “Apparently, people love watching the crazy antics of people who race hogs professionally.”

Killian chuckled as he tilted back in his chair.

“I can’t believe your stupid idea is getting any viewers.” The man threw up his hands. “It’s not like pigs are smart or anything. They wallow in their own shit, for crying out loud.” He got a sly look on his ruddy face. “Is that how you found them, Jackson? You’re career’s been wallowing in shit for years, so you finally found something that you could relate to?”

Jackson’s face went red as the whole room laughed at their boss’s joke.

His nose twitched and he let out a sneeze. “Achoo!” Covering his face, he said, “Excuse me, sir.”

“Spending too much time around those barnyard animals, Jackson? I bet—” Killian’s retort broke off as his chair collapsed, dumping the man on the carpet

“What the….” the man sputtered, rolling away from the debris.

Hands reached to help him up. It took four men to hoist him to his feet while an intern grabbed a new chair and rolled it into position.

Killian glared at Jackson as though he’d had something to do with the misfortune.

Going on as though nothing had happened, Jackson continued, “Actually, sir, pigs are very smart. It’s a common misconception that they wallow in their own filth, but actually, they use mud to keep cool on hot days.”

Killian snorted. “You’re never going to convince me of that.” The boss waved his hands in the air. “I smelled the ones you’ve brought in. They stink to high heaven. Filthy creatures, the lot of them.” He shook his head. “But whatever. If they improve our ratings with 18-34-year-olds, you can keep them on the air for another day.”

Jackson rolled his eyes. Under his breath he spat out, “Thanks.”

Porter jumped to his feet. “Don’t take that tone with me or you’ll be shopping your stinkin’ show to another network by the end of the day.”

Jackson ran his hand across his face, scratching his nose.

Killian dropped back into his chair. His large tumbler of coffee overturned, spilling its contents across the man’s laptop. Sparks shot out of the device, then it began to smoke.

“Dammit!” he shouted. “How did that happen?”

“Mr. Stevens, there’s a disaster on the set! Our star pig, Jasper, got loose! He was hit by the craft services truck! He’s dead! What are we gonna do?”

Killian’s eyes lit up at the news. “You could make some sausage…or bacon, maybe? Then that damned thing would actually be worth what we paid for it.”

Jackson shot a dirty look at his boss, then wearily waved his assistant off. “I’ll take care of it. Tell them I’ll find a replacement before shooting starts tomorrow morning.”

His boss’s face twisted into a sneer. “Looks like your show isn’t going to last after all, Jackson.” The man let out a guffaw. “I know, I’ll tell craft services to arrange a nice pig roast for the employees.”

The room erupted in laughter.

Killian stood. “And on that note, meeting dismissed.” He turned to his assistant. “Don’t forget to print out the tickets for my flight tomorrow. After putting up with all of this, I deserve a vacation.”

Jackson stuck his head into his boss’s office.

Killian looked up from packing up his briefcase.

“What’s the status on finding a replacement ‘star’,” the man made air quotes around the word, “for your show?”

“Um, I haven’t had any luck finding a replacement pig for tomorrow’s shoot. I’d, uh, like to shut down for tomorrow and Friday so I have enough time to find a suitable replacement for Jasper.”

Killian slammed his briefcase shut and glared at him across the desk.

“Absolutely not! I won’t be here to watch over you and keep you on schedule. Deadlines must be kept. If you can’t find a replacement by tomorrow morning, I’m shutting your show down indefinitely. You should be better prepared, Jackson. This is show business. You always need an understudy.” He shrugged into his suit coat and picked up his briefcase. “Everyone knows that.” As he pushed past Jackson, he spit out, “Amateur!”

Jackson tilted his head, looking at his boss’s retreating form.

“Really? I can’t have a few days to find a replacement?”

“Yes, really. Now get out of here. I have a plane to catch.”

Shrugging his shoulders, Jackson snickered. “Okay then. Have it your way. Just remember, you asked for this.”

Killian paused. Turning around, he asked, “What are you going on about, Jackson?”

“You’ll understand in a moment.” He began waving his arms dramatically as he chanted….

Help me keep this fancy gig,

Render now your aid to me,

And turn this louse into a pig!

Where moments before Killian had stood, there now sat a huge pig half-buried in an expensive suit.

Scooping the animal up in his arms, Jackson grinned.

“Come on, Mr. Porter…no, Mr. Porky. You’re going to be Hog Wild’s next star. After all, you said it yourself, deadlines must be kept.”