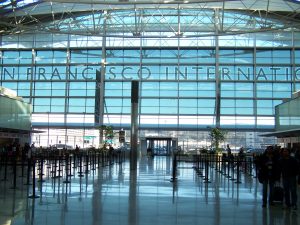 A gaggle of Asian students eddied around him, chattering in high-pitched voices, the cadence of their language falling strangely on his ears. A reunion broke out at the front of the waiting crowd, all balloons, hugs, and tears. The prodigal son or daughter was wrapped in relatives and well-wishers like a Christmas present.

The crowd thinned as each waiter claimed his or her passenger from the line and departed, moving toward the baggage carousel or outside to cabs or buses or cars.

He began to wonder if his guest had missed the plane. Maybe his guest had passed him by, unnoticed in the crowded lounge. Maybe he made up the visit, hoping that the one person who’d ever helped him would return in his hour of need. Was he delusional from too many sleepless nights, his body tired from renovating his houseboat, his mind free-wheeling into the void rather than taking the chance that his nightmares would wake him yet again.

Tin Man shook his head. No, his guest was really coming. They’d chatted through many long nights, their relationship growing from doctor / patient into something greater. Friends, certainly. But there was something beyond that he didn’t have a name for. A connection, deeper than anything he’d ever had with another human being.

The older man strode in, looking directly at Tin Man. A denim backpack rode one shoulder. About the same height as Tin Man, he was dressed all in black, from his shiny cowboy boots to his denim jeans to his pearl-snapped shirt. His black Stetson was crisp and banded in silver conchos. He was the very picture of Western movie cowboy.

Tin Man shivered. He felt the impact of the man’s crystal gray eyes, eyes that somehow had always known him, deep inside, like part of his own soul made flesh.

“James! Good to see you again. It’s been…what? How long?”

The deep calm of that familiar voice reached Tin Man and wrapped him in a warm blanket. He shook his head to clear it enough to say, “Five years since you retired.”

Lionel Cain chuckled. “You make it sound like I ran away to join the circus.”

“You might as well have. Living off the grid, out on that ranch of yours in Eastern Washington. I’m just glad you answered my email. I really need your help.”

“Well, I’m here now. We’ll see what we can do about your problem.”

“Nope.” Cain patted the shoulder strap of his backpack. “All I need’s in here.”

“My truck’s in the parking garage. This way.”

His green pickup looked out of place among all the new sedans and minivans. In the back, a tarp-covered shape reached the top of the side walls.

“You got an alien spaceship under there?” asked Cain, chuckling. “Or maybe a space rock from the asteroid belt?” He lifted up a corner of the tarp. “That’s it. You’ve got a hunk of Ceres under here, don’t you?”

The Tin Man huffed. “Nah, just more supplies for fixing up my houseboat.”

“You got that right. At least your room’s done. Otherwise you’d have a splendid view of San Francisco. From your bed. Through the ceiling.”

Cain gave him a crooked smiled. “Could be nice―as long as it doesn’t rain.”

“That remains to be seen. The anchorage is protected, so we don’t even get the evening fog rolling in. The evening winos, though, are another story.”

That was almost a joke. When the hell did I start joking again? It’s just that I’ve always felt so…relaxed around Cain. Like I can be my true self around him.

He opened the driver’s door and flipped the unlock for the passenger’s door.

As Cain settled onto the seat, he turned to Tin Man, his light eyes seeming to glow in the gloom.

“We have a lot to do in my short time here, James. Let’s get down to business as we drive. Tell me about your nightmares and let’s see what we can do about them.”

He nearly dropped the key he was shoving into the ignition. He hadn’t  mentioned his nightmares in his email invitation. How did Cain know about them?

Confusion, almost panic, rose in Tin Man. He trembled as his icy walls shattered and the world came crashing in. People talking, roaring car engines, slamming doors, all echoing loudly in the concrete cave of the parking garage. For a moment, the assault held him frozen.

He felt the older man lean over, placing a gentle hand on his shoulder. As suddenly as it had begun, the chaos backed up a few steps. He felt peace radiating from Cain’s hand.

“We’re at the same crossroads as before, you and I. Maybe this time we’ll conquer your demons before they consume you completely. Before you allow yourself to become a real Tin Man.”

“I do. We beat them back before. This time, we shall defeat them.”

And Tin Man believed him.