Our prompts were: He was such a bad driver; not for all the tea in China; and what do you mean by no?

Looking at the prompts, it just seemed natural to Kyros that the person saying “no” was responding to having to ride with the bad driver, and that they wouldn’t ride with them “for all the tea in China.” This evoked the many field trips Orion took in the fifties with the other kids from her Methodist Church.

When you’re trying to write flash fiction like this, look for links between the words. Draw from your own experience. What does A have to do with B? Once you have even one link, you have the germ of a story. Let it grow from there. 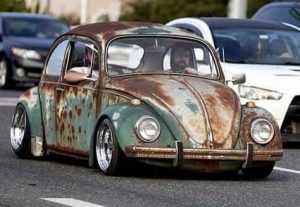 The minister glared down his hawk’s nose. “C’mon, Alex, at least tell me why.”

“He’s dangerous.” I gestured over my shoulder where the youth pastor, Kurt, sat in his car. “I won’t ride with him. Not for all the tea in China!”

Pastor Mike raised an eyebrow at me. “If he’s such a bad driver, I guess you’ll have to ride in my trunk, ‘cause the car is full.”

Sighing heavily, I gave in to the inevitable. “Oh, well, I don’t really like Chinese tea anyway.”

For a moment, he sat there stoically.

“Seriously? I know it was a lame attempt at humor, but…”

The big man’s shoulders began to shake, leading into a full out belly laugh. He clapped me on the shoulder, reminding me of my big brother, Gene, who used to do the same thing when I was little.

Somehow, that made me feel better.

Resolutely, I trudged over to the beat up Volkswagen Bug, yanked the door open, and climbed in.

Pastor Kurt gave me a scowl, but didn’t say anything. He cranked the starter on the ancient vehicle until it coughed to life. By the time he got the clunker moving, the caravan of cars had almost emptied out of the church parking lot. He pulled us into the caboose position.

We cruised along in silence for what felt like forever. When I couldn’t stand it any longer, I reached for the radio. Anything would be better than the strained atmosphere in the close compartment.

He grunted out, “Doesn’t work.”

Typical, I thought. The man rarely spoke more than two words at a time.

“Why haven’t you fixed it?”

He shrugged. “Hasn’t worked since I bought it.”

I blinked in surprise. Wow! Six words. Must be my lucky day.

“I knew riding with you was gonna suck.” I crossed my arms tightly across my chest and stared at the road ahead.

The convoy zigzagged through the backstreets, the bug shambling along in its wake. We were trying to avoid the parade on Main Street, so this was the only route left to get to the skating rink three towns over.

After he almost got us t-boned by a semi coming off the interstate, I couldn’t stand it a minute longer.

“You are the worst driver in the world!”

His shoulders hunched as if he thought I was going to hit him, then he whispered, “I know.”

Startled, I stammered out, “You…you know you’re a bad driver?”

His knuckles went white on the steering wheel and he shot me a frightened glance. “Never learned. ‘Til after seminary.”

“Seminary? Every guy I know couldn’t wait to learn to drive. Hell, I started sneaking driving lessons with Gene as soon as I was big enough to see over the dashboard and reach the pedals.” Turning as a new thought occured to me, I asked, “How’d you get around before that?”

Lapsing back into monosyllabic replies, Pastor Kurt spit out, “Bus.”

“But didn’t you have to pass the driver’s test to get a license?” I asked, even though he obviously wished I’d stop talking about it. “I did for mine last year.”

I shook my head. That explained a lot.

When he almost blew through another stop sign, I yelped, “Maybe you should let me drive.”

He gave me a look I couldn’t quite decipher. Then, to my amazement, he pulled over.

He closed his eyes and rested his head on the steering wheel. When he finally raised his head, he nodded. “Okay.”

We traded places. The bug’s stick shift grinded a little and the clutch needed some adjustment, but I had no problem driving the beat up old thing. Ten minutes later, we finally pulled into the parking lot of the skating rink. Everyone else was already inside.

After I killed the engine, we sat there for several minutes, listening to the ticking of the cooling engine.

He looked at me, head cocked and eyes hooded. I couldn’t gauge his reaction.

“Sure,” I said, shrugging my shoulders. “Why wouldn’t I?”

I felt my eyebrows shoot up.

“What gave you that idea?”

“Heard you. Didn’t want to ride with me.”

“Oh. That.” I looked anywhere but at him. Taking a deep breath, I said, “It was your driving. My parents… they were killed five years ago…in a car wreck. The other guy wasn’t drunk or anything, just a bad driver. It’s not about you personally.”

That was all he said.

We got out and made our way toward the double glass doors. Just as I reached for the handle, he said, “So, next Saturday?”

I was confused. “Saturday? What….”

“Driving lesson.” He had a crooked smile on his face.

“Yeah. Saturday. But,” I said with a laugh, “I’m driving home. Otherwise, we might not live that long.”