The prompts were: anonymous, motivated kiss, and fool’s gold.

Initially, this story was written in third person with the narrator just listing off what he saw. But when we went back over it for the blog, Kyros suggested it might work better as a true crime type story where the detective is dictating what he sees to a recorder. After that, the story took off. We could both see everything like we were watching it unfold on a TV show. That’s how you know you’re on the right track: the story starts flowing and every detail seems like it’s happening right in front of you. 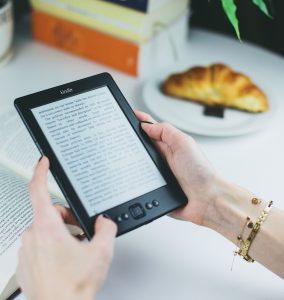 Photo by freestocks.org from Pexels

“The subject has entered a small, upscale restaurant on the lower east side.”

He glanced at the lit sign over the door.

“Rubio’s on East 26th.” Letting go the record button on his digital voice recorder, he walked further down the block, then ducked into a dark alley where he could see his subject better.

Pressing down on the record button, he continued, “Subject has taken a table near the window. She appears to be reading something on her Kindle, completely oblivious to the other diners. Is she waiting for someone?”

He saw a commotion through the large plate glass window of the restaurant.

“Subject knocked over her water when the waiter approached. He appears to have startled her. So she’s probably not meeting anyone. If she were, she wouldn’t have been so surprised by the waiter.”

After he’d cleaned up the mess, the waiter reset the table for her.

“Subject has ordered food and returned to reading. Why is she here if she isn’t meeting someone? From past observations, it’s an odd way for her to spend her evening. Usually, she either eats with her family, friends or with a client. Never alone. Curious.”

The woman’s dinner arrived and was consumed without further incident.

“Subject glanced at her watch and flagged down the waiter. After paying the check, she hastily slipped into her expensive jacket, grabbed her things, and exited the restaurant. Once outside, Subject again glanced at her watch. Why is she suddenly in a rush? Is she meeting someone? And that begs the question, who is she meeting? Good questions. And I need answers.”

As she walked to her small, eco-friendly car, he cautiously made his way to the large land yacht he was driving that evening. When she pulled out of the parking garage, he let several cars pass, then fell in behind her.

He paused the recorder as he drove past the small, darkened park she’d pulled into. Looping around the block, he parked a few stalls away and got out.

“Subject has stopped at Centennial Park. I am following on foot. Is the Subject meeting someone here?”

He caught sight of her just as she passed the statue of General Grant.

“Subject has been joined by a tall, blond man, roughly six feet tall, wearing brown slacks and a burgundy overcoat.”

He hurriedly placed the recorder in his shirt pocket and pulled a digital camera from one of the pockets of his overcoat. He threw the strap over his head, then grabbed the telephoto lens from another pocket, joining the pieces together. He snapped several pictures of the couple as they walked through the dry, fallen leaves.

Letting the camera drop to his chest, he pulled the recorder back out and began to dictate. “My subject and the tall man are now kissing beneath a maple tree. They are walking through the park, alternating kissing with more talking.”

By the weak yellow glow of an old-fashioned lamp post, he saw the tall man stop, place a finger beneath the woman’s chin, then tilt her head up to meet his lips.

Grabbing his camera, he snapped off two dozen more pictures of the couple’s intimate moment.

“Subject and the strange man have been lip-locked,” He checked his watch. “for approximately six minutes solid.” He rolled his eyes. “I’m not sure what motivated this kiss, but enough already. For crying out loud, this is a public park, not a hotel room.”

The couple embraced one final time before taking separate paths into the darkness.

“Subject is exiting the park. Alone.”

He let her go, following the other man long enough to get a better picture of his face. As luck would have it, he also managed to get a few shots of the man’s license plate as well.

“The paramour’s license plate number is 1DOX 15. Sorry, dude, I guess you don’t get to stay anonymous.”

As he made his way back to his car, he considered what to do with the pictures. Usually, his client had ideas or long-range plans about their disposal. This time, not so much.

Climbing into his station wagon, he set the camera down on the passenger seat and rested his head against the steering wheel.

“No matter what they think they have,” he muttered, “it’s nothing but fool’s gold. Pretty and glittering, but ultimately worthless. I’ve seen it a hundred times.”

Taking a deep breath, he started the car.

“I wanted to be a detective so badly growing up, and I make a decent living doing it.” He shook his head. “But sometimes it really sucks being a human lie detector.

Like when the subject of your investigation starts the evening by telling you she’s going out with friends.

Especially when that subject is your wife.