Our prompts for this one were: Hotel for Single Women and May I See an ID. As you have probably deduced from previous sets of prompts, there is no telling what will come up when you get several prolific writers together and ask them for prompts!

When Orion started thinking about the prompts, she envisioned a beat cop. That led her to think of her character, James Cavenaugh, who she created for a couple of other short stories. He would later bull his way into the main cast of Dreaming of Xeres, the first book in our Third War series.

(Kyros: He was only supposed to be a bit player. We needed a cop and he was perfect. Then he just wouldn’t stop showing up. He demanded to be a bigger part of the story.)

(Orion: That sometimes happens, when you create a character. They become real to you, then they start dictating their own actions and reactions!)

Anyway, after delving a bit into his history, Orion decided he’d do perfectly well as the policeman for this story. That set the location as Boston, James’ hometown, and gave her the general time period (the mid-2000s).

So, who would James meet? And why would he need to see an ID? To satisfy the Hotel for Single Women prompt, it seemed obvious to make the person a woman and the story grew from there.

When Orion originally wrote the story, the woman pulled out a cap gun like the ones Orion grew up with in the fifties. You know, the ones that looked like Roy Rogers just drew it out of his holster?

When Kyros first read it, he shook his head and got a good laugh out of it, saying, ‘They don’t make cap guns anymore! And the toy guns they do make all have orange plugs over the end of the barrel to denote that they are fake.’

Orion was apoplectic. (Orion: What? Does that mean I can’t get caps for my toy guns? AARGH!)

(Kyros: Don’t worry, she can, she just has to find an antique toy dealer who still carries them. Though why would she wanna shoot off a cap gun? Who knows?)

So, in the original story, the gun was a cap pistol, but a quick shot of reality meant that, for the story to work, the gun had to be real. 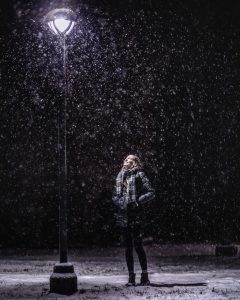 Photo by Annie Niemaszyk on Unsplash

MEETING ON A COLD WINTER’S NIGHT

The young woman hesitated, then pulled her bag off of her shoulder and began to dig around inside. She shivered in the cool night air.

Jim Cavanaugh shifted from one foot to the other as the chill penetrated his stiff boots. Gods, I hate working the night shift. It wouldn’t be so bad if the streets were better lit. He glanced down at the uneven cobblestones under his feet. Or less treacherous to walk on.

And why does everything squeak when I move? It’s like I’m a walking police advertisement. ‘Hey, look at the rookie. Brand-new uniform and he makes funny noises when he walks.’ He mentally shook his head. And I get stuck working the overnight shift dealing with all the drunks and hookers.

He sighed, still waiting for the woman…no, girl, he amended.

“Miss?” he prompted, raising an eyebrow.

“I know it’s in here,” She shivered, her voice breathless. “…somewhere.”

She’s afraid. He glanced around quickly. Is it because it’s dark? Because I’m a cop? Or because she’s done something wrong?

She slid a Sig Sauer P238 out of her purse and pointed it at his chest.

Holy shit! Every hair on his body jumped to attention. Deep breaths. You know how to handle this, he told himself. Remember, you faced worse in Iraq. You can have a PTSD breakdown later.

Keeping his voice low and calm, Jim said, “You know I can’t do that, miss.”

Besides, I survived Iraq and four older brothers who are cops. If I get shot walking a beat, I’ll never hear the end of it.

“But…but you must. I can’t….” She began to cry, the small gun wobbling in her limp grip.

Jim carefully took it from her unresisting fingers. Flipping the safety, he deposited it in one of his great coat’s pockets.

He took a closer look at the girl.

Gotta be a runaway.

Using the most soothing voice he could summon up, he asked, “Miss, do you have somewhere to stay?” Envisioning her curled up on a park bench or beneath a cold underpass, he added, “Somewhere warm?”

A frightened, hunted look came over her face. Pulling away, she all-but shouted, “No, no. I’m all right. I was just…walking home from work.”

“Right….” He huffed a gentle laugh. “You do realize that since you pulled a gun on me, I could take you in, right?”

The girl’s face flushed. Panic flared in her eyes.

Hmmm. Some of the guys at the precinct told me about a place that takes in people like her. Now’s as good time as any to find out if that’s true.

Cocking his head, he asked, “Do you need a safe place to stay? The Hotel for Single Women is about three blocks over. They’ll take you in.”

“But I don’t have any money,” she wailed, covering her eyes with blue-veined hands.

Awkwardly, Jim patted her on the shoulder. “Don’t worry. It’s free. They help women get on their feet or get back home, whichever they want.”

“Yup.” He extended an elbow for her.

She wrapped her thinly-clad arm through his and huddled close.

Looking up into his dark eyes, she gushed, “I’ve never met a knight in shining armor, but now I know one in blue.”

Jim smiled to himself. Maybe the night shift isn’t so bad after all.