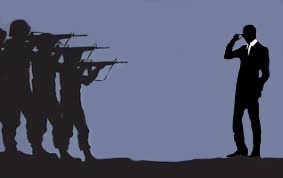 “Help! Can anybody help me?”

A sharply dressed man walked up.

He gestured to someone the Congressman couldn’t see.

A shadowy group of people walked in, forming a line facing the Congressman. They all carried assault weapons.

“I’m a US congressman! I demand you let me go!”

His only answer was silence.

The sharply dressed man walked a few steps away.

The Congressman felt the bullets rip through his body.

A sharply dressed man walked up.

“I remember you,” the Congressman cried. “Noooo….” His face went pale.

The man smiled. “Oh, yes, I’m sure you do. After all, this isn’t your first go ‘round. I do hope you’re enjoying our hospitality. We aim to please here in Hell.”

“I’m in Hell?” the Congressman protested. “But…but I was a good Christian.”

Satan raised an eyebrow. “Oh, really? So is that why you took money to block any gun laws from being enacted?”

“Oh, don’t give me that crap!” The Devil shook his head sharply. “We both know that was written about a ‘well-regulated militia,’ not about everyone having access to automatic weapons.” He pointed a perfectly manicured finger at the Congressman. “Do you have any idea how many people have been killed because you refused to act?”

“But I always offered thoughts and prayers to the victims,” he protested. “They should have had a good guy with a gun there….”

Satan shook his head. “You know that’s a lie. Even when there was a good guy with a gun on hand, people still died. They’re either the first to die, like the guard at the Pulse Nightclub, or they don’t get involved, like that Parkland school guard.”

A group of people walked in, facing the Congressman.

He squinted, trying to make out the faces of the people he knew were about to shoot him. They looked different from the last time.

Two men walked out of the shadows.

His eyes lit up when he realized who was walking beside Satan.

“Jesus? You’re here to save me? I knew I didn’t belong here.”

“No, my child, I am here to oversee the loan of the pure souls who are just visiting this realm.”

A group of people walked in, facing the Congressman.

“My God, how could this be happening again?”

“Haven’t you realized it yet, asshole?” Satan chortled. “These are all the people who died because you refused to enact gun control.”

Satan noticed the tears and smirked. “Here in Hell, these innocents are allowed the revenge they deserved but couldn’t get in life.”

A look of horror crossed the Congressman’s face.

Jesus leaned toward Satan. “How long do you plan on torturing him this way?”

“Well,” Satan mused, “since 35,000 people die every year in the US from gun violence, I’d say I can keep this up for quite some time.”

Jesus nodded, clapping Satan on the back. “Glad to see you’re doing some good for a change.”

They both stepped aside.

The Congressman screamed, “Jesus, help me!”

As the Congressman felt the bullets ripping through his body, he heard Jesus’ voice.

“You have my thoughts and prayers.”

For the love of money is the root of all evil: which while some coveted after, they have erred from the faith, and pierced themselves through with many sorrows. – 1 Timothy 6:10 King James Version

Addendum: When we finish a story, we always check the word count. This one ended at 664 words. Because of the nature of the story, we just had to find a place to add two more words to make it end with 666 words, as a nod to the biblical number of the beast!