Our prompts were: Gesturing, guessing, getting it wrong; pointless pondering; buffalo hide sandals.

With twice as many prompts to work into our story, still we wrote one of our shortest pieces, at 287 words! It was the buffalo hide sandals that led us to the clothing of the Sixties. Pointless ponderings sounded like a pompous boss (it’s called alliteration when several words in a sentence begin with the same letter or sound). One thing led to another, led to another…and a story was born. 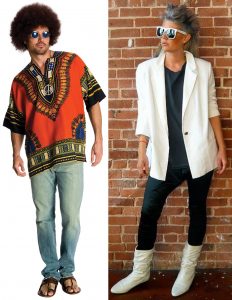 “What the hell are you wearing?”

Her companion looked down, inspecting his garments. “What? I look fine.”

She shook her head, gesturing at his outfit. “No, you don’t. What about that tunic? It’s completely inappropriate. And no one wears buffalo hide sandals anymore, either.”

He gaped at her. “They were okay the last time I was here. It’s fine, really.”

She sighed. “This isn’t the Sixties anymore. You’ve got it all wrong.”

“Well, I have to admit it has been awhile since my work rotation brought me here.” He shrugged. “I was just guessing that things hadn’t changed that much.”

“They have. You’ll need to put on something else.”

Turning, they realized their boss had come up behind them unawares. They sprang to attention and saluted.

“Sir. Um, we didn’t know you were here, sir. We were just about to start our mission.”

Their superior glared at their disheveled clothing. Rolling his eyes, he shook his head, then returned their salute.

“Neither of you is in the proper uniform for this endeavor!” he growled. He pointed at her. “Those shoulder pads went out of style in the Eighties.” Switching his attention to her companion, he added, “And don’t get me started on your,” He waved his hand up and down. “everything.”

“Stop your pointless ponderings and head back to the ship for new attire.”

The commander stalked away, tossing back, “Dismissed.”

The two crew members hustled back to their vessel for new apparel. After they found appropriate clothing, they headed back out.

“We need to hurry. We’re way behind schedule,” he groused at her.

She smiled. “Don’t worry. We have plenty of time. It’s not like these humans harvest themselves, right?”