Orion wrote this little story for the prompt: The boy beside the mailbox. When Kyros first read the story, he made a face, saying he needed a shot of insulin to counteract the sweetness overload!

It was an okay story, as written, but the editing made it much more fun and not quite so sweet. It’s sort of an extended joke. Kyros felt that the story gave away the ending way too soon, so he suggested some edits that helped conceal the surprise until the very end.

We hope you enjoy our little modern-day fairy tale. 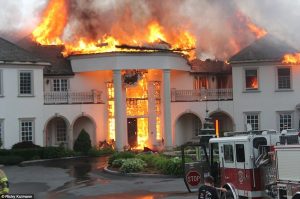 PERILS OF THE PRINCESS

The boy beside the mailbox waved his arms at the fire truck. The first fireman out of the cab ran to him, kneeling to the boy’s level.

“Yes, sir. You gotta hurry! Our dopey old doorman is trapped in daddy’s office by the front door.” He sniffed and wiped a tear from his soot-covered face. “And you gotta save my sweet princess!”

The fireman turned quickly to the other firemen. “There’s a man inside. Doc, Hap, find him!”

Turning back to the boy, he asked, “Is there anyone else in there?”

“Good boy. Now tell me where to find your princess.”

Wrapping an arm around the boy’s thin shoulders, the fireman tried to calm the boy.

“Where did you see her last?”

The boy gulped back tears.

“We were in the nursery upstairs. We smelled something burning and ran, but the smoke….”

Glancing up, the fireman saw that only the right wing of the royal manor was engulfed. The left wing appeared flame-free, at least for now.

“Where is the nursery?”

Hesitating, the boy pointed to the right. “Up there.”

Passing the child to an EMT, the fireman grabbed his equipment and his partner and strode toward the building. As they reached the front door, Hap and Doc emerged, cradling a small man between them. They hustled him off to the ambulance.

Once inside, they climbed through the darkening haze up the central staircase, turning right at the top. The fireman encountered a door with a  Mother Goose painting.

“This must be the place,” he shouted.

“Princess? Where are you? Yell if you can hear us!”

They were well into the room when an unholy shriek came from beneath a shelf of toys and books.

A streak of white exploded from the darkness and leaped into his arms. Clasping the small shape to his chest, he barked to his partner, “Got her!”

Turning, he found flames licking around the door they’d entered.

“We need another way out!” Feeling along the wall, the man prayed for a second exit.

Encountering a knob, he checked the door’s temperature. Thankfully, it was cool to his touch. Wrenching it open, he could just make out stairs heading down off to the left through the swirling smoke.

The larger fireman magically appeared from the haze and the pair ran for the stairwell, the fire snapping at their heels.

The dark stairwell wasn’t on fire. Yet.

Stumbling outside at the bottom, they dashed around the corner toward their engine and the aid car.

The boy spotted them first. Breaking away from the EMTs, he threw his arms open as he ran.

With a grin, the fireman knelt down and transferred the bundle into the child’s waiting arms.

The boy hugged her close, hearing the rapid beat of her heart. A moment later, he giggled when she kissed his face.

“Oh, my sweet Snow White. I thought I’d lost you,” he whispered.

The fireman’s partner laughed and clapped him on the back.