The prompts were: some time to kill and languishing in a cheap motel. These suggested a bad, forties dime novel detective story to Orion. You know that type, where the sultry woman shows up to hire the hard-boiled detective to solve a mystery. She tried to write one evoking that era and style but simply had to put her own twist on it, as you’ll see. 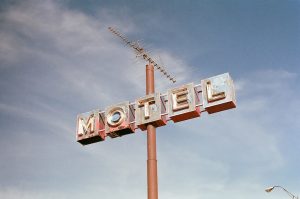 Photo by Steven Lewis from Unsplash

SOME TIME TO KILL

I was languishing in a cheap motel on the disreputable fringe of the city, waiting for a contact to show up. It was the type of place you breezed past without noticing, on your way home from work. From its flickering neon sign to the debris-strewn parking lot where anonymous vehicles hunched against the wind, it was invisible.

A scratching sound interrupted my third perusal of the daily paper. Tossing it down on the faded, worn bedspread, I went to the door and applied my eyeball to the peephole.

That’s odd, I swear I heard something.

Cautiously, I turned the knob.

I was momentarily stunned by the sultry female standing outside my door. Silently, the lovely creature insinuated herself through the opening. Everything about her was meant to seduce me, from her dainty walk to those long dark lashes veiling sky blue eyes.

She checked me out as I closed the door and waited for her next move.

She said not a word as she cased the room.

The dingy curtains and drab carpet were summarily dismissed. The open bathroom door got a sniff of disgust. And my threadbare chair elicited a not-so-subtle eyeroll.

At last, she settled upon her target—my bed. Moving languidly toward it, she brushed aside my newspaper and made herself comfortable.

Warily inching closer, I slowly sat down beside her.

She didn’t move away from me, though she seemed hyper-aware of my presence. When I reached a tentative hand to touch her shoulder, she drew back. I snatched my hand away, afraid she’d bolt.

I heaved a sigh.

“Well, we seem to be at an impasse here. You won’t talk to me. Or even let me touch you. Yet, here you sit. In my room. All alone. With me.”

I searched for something I could do or say. Maybe offer her a drink? No, all I had was tap water. Food? I doubted she’d be impressed by my leftover pizza, moldering on the little round table next to the dingy curtains.

I stood up abruptly.

Startled, she scooted across the bedspread before settling against the propped up pillows. Her eyes followed me as I paced the narrow aisle between the foot of the bed and the dresser. I had to sidle to avoid the TV, bolted to its metal adjustable arm right at shoulder height.

Raking my hand through my close-cropped hair, I sighed then made a decision.

I opened the door to the parking lot, shouting, “Get out! Off with you!”

She gave me a startled look, leaped from the bed, then fled from the room. Slamming the door behind her, I returned to my bed and picked up the newspaper. I went to sit down, but first I had to brush the thick black hair she’d left behind off my pillow.

Now I remember why I don’t have a cat. They’re fickle and they shed everywhere.