Our prompt here was, Is that your banjo?

Suddenly, Orion found herself in a barn with musicians tuning up in front of a rustling audience. Having read the Bedlam Bards series by Mercedes Lackey, it was apparent to her that everyone was waiting for the magic to begin.

The challenge was to convey the theme without overusing the words ‘magic’ and ‘music’. Such a short story—the span of only one song—required a lot of back and forth between Kyros and Orion to produce a clean story that rang true. 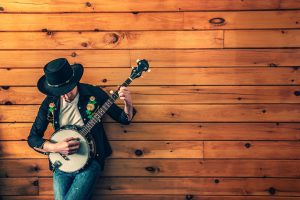 THE MUSIC AND THE MAGIC

The dim hall rustled and stirred with quiet chatter as the audience arrived and took their seats. I walked up to the stage, my battered black case thumping against my leg.

“Is that your banjo?” asked the frontman of the small ensemble settling in to play the first set of the evening.

“Sure is,” I said, pulling my instrument from its case. The metal glinted in the stage lights, its white face shining like a full moon.

“Care to join in and make some magic with us?”

“My pleasure,” I said, choosing a chair beside the guitarist. These players were some of the finest musicians in these parts. Together we would conjure up the magic to spread joy throughout our world.

I began tuning up, the sweet notes were a promise of magic enfolding me like a blanket. The musicians around me adjusted their strings in a cacophony of sounds that, at the moment, didn’t seem to herald music, let alone magic, but I knew that would come in time.

The leader called out the tune, counted off the tempo, and we began to play.

The bass thumped the rhythm. The guitar reverberated with sprightly chords. The fiddle’s song took flight and soared above us all. The bodhran’s beats doubled and tripled. My banjo vibrated as I strummed and plucked, my heart speeding up to match its beat.

The magic began like a small flame, tender and fragile. Listeners swayed gently to the rhythm.

The magic took hold as the music swelled and sped up. Crackling, it leapt into the audience. It gathered up their attention like a fire-and-brimstone minister at an old-time revival.

The magic fused their souls into one singular being that surfed the waves of music across the sky, a pure spirit, free of the earth. The magic roared, its flame now a bonfire reaching for the stars.

After a time, the music slowly receded, the listeners riding the ebb tide back to their seats. The magic collapsed, tossing out one last burst of sparks, until all that remained were embers, glowing softly among the ashes.

The melody died. A moment of silence fell around us, as the audience mourned the loss of unity.

Then came the thunderous applause, releasing the magic, returning it to the musicians.

My fellow musicians and I sat quietly, storing that power in our souls like a banked fire.

Our instruments thrummed with anticipation.

Waiting for the next tune to be called.

Waiting for the music to begin.