The prompts we had this time jogged one of Kyros’ memories, so that became the framework for this story. Our prompts were: The view out of my window, muddy shoes everywhere, and UPS truck (which we ended up interpreting as Universal Package Service because of the location). In another life, Kyros was the cable guy. One day he pulled up to a home in a new development area that had a sea of mud for a front yard because they hadn’t laid the sod yet. Shortly after he arrived, the homeowner’s kids barreled past him and into the house, leaving a trail of muddy footprints. The mother’s reaction was priceless and left an indelible mark in Kyros’ memory.

The decision to set the story on Mars came about because we had both recently seen the movie The Martian. So with Mars firmly in the forefront of our minds, figuring out what view was out the window was a snap. Olympus Mons is the largest mountain in the solar system. How tall? Would you believe that it is so broad and the slopes are so gradual that from the edge of the caldera, the base of the volcano would be beyond the horizon. It’s a volcano so big that it curves with the surface of the planet. Why wouldn’t you move someplace where that was your view? 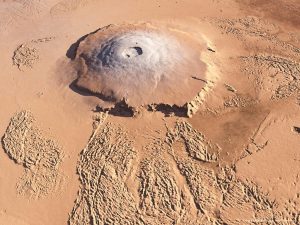 Half-buried amid towering stacks of boxes, Janet Parsons glanced up sharply as her kids thundered in the side door.

The two boys skidded to a halt and inspected their red-mud-covered sneakers. Ralph twisted around, his eyes following their crimson footprints back to the door.

His little brother, Cecil, gulped out, “We are sooo busted.”

“What did I say before you went outside?” she asked ominously.

“Stay off the lawn and out of the dirt,” Ralph recited.

“That’s right,” she said, nodding. “If you kill the seeds, the lawn won’t grow and you’ll never be able to play out there.”

Cecil protested, “We tried the playground, but it smells.”

Janet huffed a laugh. “Deal with it. That’s only because it’s new. The ground there is plascrete so you can’t hurt it.” She sighed. “You have to clean up this mess, because I don’t have the time.” She gestured in a circle. “I have all of our boxes to unpack.”

Janet grabbed the cleaning supplies from the kitchen while the kids removed their muddy sneakers.

“Here you go, boys. Get busy. This mess better be gone by the time I get back.”

“What now?” she muttered, marching for the front door.

On the step, she found a young man in brown shorts with a cart full of boxes. The silver tag on his chest declared his name as Sylvester.

“Delivery, ma’am.” The driver smiled warmly. “I’ve got a couple stacks of boxes for you today.”

Janet inspected the return address. “Not again!” she groaned, rolling her eyes. “They’re from my mother-in-law.” She signed the proffered datapad.  “We just moved here from the city and she insists on sending us ‘every little thing we might need.’”

“Well, this is pretty remote,” Sylvester agreed, “but it looks like a nice area.”

Janet waved the man in. Gesturing out the large window, she asked, “Isn’t the view lovely? It was that unobstructed view of the mountains that sold me on this house.”

Sylvester whistled appreciatively. “That would do it for me, too. My husband and I were thinking of moving down south as well. The incentives and tax breaks would cover most of the moving expenses.”

“Then you should stop at the demo model on your way out and take a tour,” Janet said. “It sure would be nice to have more neighbors.” She sighed, then made a face. “Especially ones with kids. My two boys are bored out of their skulls without other kids to play with.”

The Universal Package Service driver chuckled. “Well, we’ve got three girls we’d be bringing with us. I know they’d love someone to play with.” He shook his head and made a face. “Right now, we live in an old building in the city my husband inherited when his parents moved to Gliese for work. It’s mostly retired couples.”

“Oh, the poor darlings,” Janet said. “Then moving here would be good for them too.”

Sylvester nodded as he set the first box on the floor. Reading the packing slip, his brow furrowed. “Emergency Oxygen? Why would you need that?”

“My husband’s mother sent that.” Janet chuckled. “Though she probably should have kept them for herself, considering how bad things are back home. I keep telling her she should move here.”

Sylvester grabbed the last box off his cart. “Yeah. I hear Earth’s air is barely breathable these days. Things are much better here on Mars. Our atmosphere has been stable for five years now.”