Here’s the next piece in our examination of the way we write short stories. The prompts we had this time were: Blue sleeves, farmers market, pawn shop, indispensable, thoughts of a crash test dummy, summer.

The first thing that jumped off the page and inspired us was the line about “thoughts of a crash test dummy.” What exactly would a crash test dummy think about? That led us to contemplate what kind of discrimination it would face from other robots. (Can you tell we read a lot of science fiction?) After all, crash test dummies are essentially made to be destroyed. That sparked the thought of early Star Trek TOS stories where they presented prejudice in a way that the audience could relate to without challenging their real-world prejudices. The rest of the prompts quickly fell into place once we had that germ of a story. What came out of that contemplation is the story that follows…. 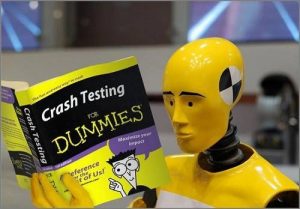 “Okay, you with the blue sleeves….” Professor Ian Carmody consulted his seating chart. Around him, the students in Finance 101 waved for recognition. “Ms. Trefell, where would you spend 100 credits?”

The young black woman stood. “At the farmers market! It’s even close to my dorm.” She thought for a moment. “I’d get some fresh veggies. Ooh, and that yummy honey the old lady sells. And I could really use a new scarf, my old one’s practically falling apart.” She smiled. “That would probably leave me just enough to grab one of Mr. Dewey’s fresh-made pizzas.”

“Tasty, I’m sure.” He laughed at her enthusiasm. “Next, um,” He glanced at the seating chart on his tablet computer. “Mr. Jackson.”

A thin man rose, his black hair so closely cut it looked more like a five o’clock shadow.

“I’d head straight for the pawn shop on Main. They’ve got a wedding ring that would be perfect for my sweetie.” His face reddened to the roots of his almost-non-existent hair. He peered around furtively. “Don’t any of you tell her. It’s a surprise.”

A female voice from the back row called, “That’s what you think. Carol’s been waiting for you to pop the question since the end of summer.” The laughter made Mr. Jackson duck his head.

Carmody huffed a laugh. “Well, I guess you’re on the right track then, young man. Who’d like to go next?” Scanning the raised arms, he selected a bright yellow hand. Craning his head to see around the massive football player between them, Professor Carmody blinked when the student came into view. “Yes, Mr. Senfoyl?”

The student in yellow and black stood uncertainly.

“And what would you do with 100 credits?” Carmody prompted.

The student hesitated before speaking. “I know exactly what I’d spend it on, sir. A new paint job. For me.”

Professor Carmody nodded, smoothing a hand across his hairless head. “So that you could fit in better?”

The normal background chatter of the classroom ceased abruptly.

The bell rang, shattering the silence.

Carmody raised his voice. “Wait! I want you to keep a diary of every credit you spend between now and class next Thursday.” He waved toward the door. “Dismissed.”

The room filled with the sounds of fifty students rushing to be somewhere else.

Pointing at the student in the yellow jumper, he asked, “Mr. Senfoyl, would you please join me?”

Mr. Senfoyl stopped midway to the door. He nervously approached the professor’s desk.

“Are you certain you want to give up your robotic heritage just to fit in?”

Senfoyl’s yellow head bobbed. “Oh, yes. If I was silver, like you, everyone would accept me as just another robot. All the students think I’m an imbecile, or worse, they ignore me completely. Some of the teachers make fun of me too.”

“Teachers?” Carmody’s head whirred for an instant. “Interaction with your teachers is an indispensable part of your education. I’d advise you to take this problem to the Regents. It’s our job as teachers and administrators at this college to ensure everyone gets a good education.”

The professor’s voice softened. “It wasn’t very long ago that humans felt the same way about robots like me. Now, no one thinks anything about us running the educational system.”

Carmody put one steel arm around Senfoyl’s shoulders. “You wait. It won’t be long before former crash test dummies like yourself find a place in human society too.”