Continuing our examination of how we write flash fiction, next up is OF COOKS AND CARROTS. This short was written from a single prompt, carrots.

For us, contrary to what we have heard from other writers, working from a single prompt is much harder than from multiple prompts. When you have several prompts, you start to see connections between the words which creates the world and thus your story. With a single prompt, however, the possibilities are endless and we find we don’t know where to begin. With this story though, once the character of the wizard showed up, the story practically wrote itself. From the time we started until we finished was barely over an hour. Enjoy! 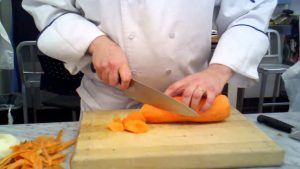 OF COOKS AND CARROTS

“Cook, have I not told you before?” the wizard asked, raising an elegant eyebrow. “I refuse to eat carrots.” He pointed one long finger at the steaming trencher with its orange intruders. “Take these things away. Now.”

The red-haired cook didn’t budge. Instead, he crossed his arms over his chest, a long wooden spoon held at the ready. He rocked on his heels, making his spotless white apron sway beneath his belly.

“Master, do you remember the omelet you raved about this morning?”

Puzzled, the wizard nodded. “Of course. It was splendid. What of it?”

“And the stew last night?”

“And the dessert bread?”

“Yes, yes,” he responded impatiently. “I have to admit your creations are far above that of any cook I’ve ever hired. But what does that have to do with these orange abominations you’ve placed before me?”

“All those dishes, in fact almost all of your food this summer, have contained carrots. And you loved them all.”

The wizard turned a delicate shade of green and it seemed for a moment like he was going to throw up.

So that’s why my magic has been so messed up lately, the wizard thought angrily.

The cook looked so smug the wizard was sorely tempted to wave a hand and remove the cook’s entire face. Pulling himself together, the wizard aimed his most thunderous scowl like a cannon at the cook.

“So you tricked me, did you?” he said, his voice deceptively calm and quiet. “Did you perhaps stop to consider I had a good reason for not eating carrots? Like, perhaps, it interferes with my magic?”

The cook’s eyes widened as he stepped back, his face almost as white as his apron. Quivering, he held his spoon in front of him like a shield.

The wizard rose from his chair, extracted a dark wand from his robes, and swept it into the air.

The wooden spoon clattered to the floor.

The men and women in the keep’s vast kitchen studiously avoided the wizard as he entered the room.

“Carrots are good for you,” the wizard purred at the rabbit as he placed it in a nearby cage.

Reaching through the bars, he gave the rabbit a carrot and stroked the soft reddish fur.

“As long as I don’t have to share them, everything is fine.”

The rabbit froze, the half-chewed carrot still in its mouth, then rocked away from the wizard’s touch.

Turning, the wizard called out, “You there. You are now my head cook.”

A thin woman with grey hair hurried over to him, drying her hands on her food-splattered apron.

“Has the menu been set for supper tonight?” the wizard demanded.

“No, Master. Is there something particular you desire?”

Glancing at the caged rabbit, the wizard smiled.

The woman’s face blanched, even as her head bobbed. “Certainly, Master. Rabbit stew you shall have.” She paused a moment, biting her lip and glancing at the caged rabbit before she added, “Without carrots, of course.” Then she curtsied and scurried away.

The wizard cast a look at the now-quivering rabbit.

“Let that be a lesson to you, Cook. Never, ever, cross a wizard.”