The prompt for this story was: Nestled in the corner of the attic. Orion is fond of time travel stories, ignoring the logic, or lack of same, that Kyros usually finds in them. This little story unspooled itself from the idea of time-traveling through a mirror. The original story wasn’t quite as logical as it is now that Kyros has turned his hand to it. 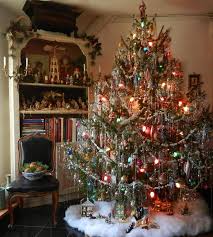 THROUGH THE MIRROR AT CHRISTMASTIDE

“Terry, we have to save her,” James cried, making for the library door. I nearly lost him on the second set of stairs, barely glimpsing a door closing. My lungs burning, I flung it open, launching myself up yet another set of dusty stairs, this time into an attic.

A manor house this old had to have an attic, I thought, but who needed help to send Terry bolting up here? He’d just been holding a gold-framed photo as if it were the most precious thing in the world. Over his shoulder, I’d seen a pretty girl with long golden curls and dimples smiling sweetly from the back of a spotted pony. I’d never seen her before, but then, Eastland Manor was James’ home, not mine.

I caught up to him in a dim corner under the rafters, staring at a huge ancient mirror.

“What…are…you…doing?” I asked between panting breaths.

“The mirror! It’s a portal. My father told me about it before he left for Iraq. It’s a family secret. I just remembered it and realized what I could do with it.” His voice grew quieter. “It leads to the past. You concentrate on a particular day and time, then…walk through the mirror.”

“But why?” I asked. “Why would you even want to go into the past? You said we had to save someone, who?”

“Clara! I have to save her and now I know how!”

“What’s so special about this one girl? You’ve dated dozens of girls since I met you.”

“She was perfect. She could make my day with just a smile.” He paused, obviously searching for the right words. “When my grandfather died…she was the only one who could make me smile.” He ran a trembling hand through his hair. “If I’m honest with myself, I’d have to say that those girls you saw me with…. Each time, I broke things off because they couldn’t measure up to my memories of her.”

With a shrug, I decided to humor him. Either we’d end up in the past or we’d stub our noses on the damned mirror.

I stepped up beside him. Our reflections, clouded and dim, stared back at us. “When do we go back to, to save this Clara?”

He reached for my hand; closing our eyes, we stepped through the mirror. For a moment, it felt like we were pushing our way through honey, then we stumbled onto the same dusty floor we’d left, but the wintry gloom had become sunshine. James sprang up, dashing for the stairs. Thankfully we were heading down this time.

When he stopped, I barreled right into him.

“We haven’t much time. We need to get to the stables,” he hissed over his shoulder.

“Stables? You don’t have horses.”

“We don’t keep them now because of what happened today. We’re here to change all that.”

Outside, storm clouds had begun to gather, one of this area’s fierce summer storms, no doubt. We snuck into a stone and wattle-and-daub building that I knew as a garage. The dim interior smelled of horse manure, hay, and straw, with a musty undertone. I welcomed the coolness after the heat and humidity outside. James led the way along a row of stalls, their occupants watching us with interest. In the last one stood the spotted pony from the photo.

James whispered, “Keep watch.” As he passed me, he laid a hand on my shoulder. “I’ve loved Clara all my life. This is my chance to get her back.” He smiled grimly, reaching for the bar holding the stall closed.

For a moment, he struggled with it. Over his shoulder, he cried softly, “Help me! The damned thing’s stuck.”

We could both hear the sounds of a girl’s laughter and a man’s low rumble, drawing closer and closer.

I raced to James’ side. Between us, we shifted the bar and swung the door open. My friend dashed in, grabbed the pony’s halter and towed the beast from the stall.

I hastily shoved the door closed and ran for the cover of a stack of hay bales. I heard a slap, then hoofbeats racing away.

Terry crept up behind me, quietly saying, “That should do it.”

“Do what?” I asked, looking at him over my shoulder.

“Keep Clara from riding her pony. Lightning struck too close to her and the pony. She was bucked off and killed.”

The girl from the picture bounced into view, trailed by an unhappy man carrying a saddle and bridle. Now I saw why Terry was so infatuated that he risked going back in time to save her. Even as a teenager, she was stunning.

Her hair was like golden waves, floating about her shoulders as she danced into the stable.

Her eyes! I’ve known a lot of women in my time, but I’ve never seen eyes so purely crystal blue. I swear, they sparkled. If even half the things James told me about her personality were true, this woman would be a force of nature when she grew up.

“No, Miss Clara. You shouldn’t go out today. It’s gonna storm right soon and you’ll get wet sure.”

“But I want to ride Laddie before great-auntie’s guests arrive.” She pinned him with those sad-puppy-dog-eyes such girls seemed born knowing how to wield. “Please?”

“He was right here, Miss Clara, not half an hour past.” He shook his head. “I’m sorry, but I guess you’ll hafta miss your ride today.”

Our return through the mirror was something of an anticlimax.

Outside, snow still covered everything, new flakes spiraling down to join the old drifts.

In the front parlor, I flopped into a chair. James paced the thick carpet from the fireplace grate’s warming blaze to the magnificent Christmas tree and back, tensely watching the clock on the mantle.

When a knock sounded, he bolted through the archway into the foyer. With visibly shaking hands, he pulled open the heavy wooden door.

A flurry of snow blew in as a hooded figure stepped onto the hall tiles. Dropping an armful of presents onto the half-table, the figure tossed back its hood, revealing a young lady with long golden curls. She turned and threw her arms around James. For a moment, he stood frozen, then he embraced her like he’d never let go.

“Why, James,” she said with a laugh. “Whatever is the matter with you? You know I always come at noon on Christmas Eve. You act like you haven’t seen me in years.”

“It’s been too long, Clara, much too long.” Breaking apart, he gestured toward me. “And this is my friend, Terry. From college.”

She smiled at me with those dimples from the photograph. This, this was the woman that girl had grown into. The woman who wouldn’t exist without our changing the past. He thought for a moment, If I hadn’t helped James change the past.

I took her hand, spinning us about. She let out a little squeal of delight. When I looked up, we stood beneath the mistletoe.

She followed my eyes and her mouth formed a little O of surprise. Then, with her crystal blue eyes twinkling, she leaned toward me and gave me a kiss.

My head spun for a moment. I felt a vast sense of deja vu, like I’d known her my entire life. In that moment, I knew. This was the woman I was meant to marry.

I noticed James watching us. His face was red and a little green monster was dancing behind his eyes.

Sorry, buddy. If it weren’t for my help, she wouldn’t be here for you to pursue, so I’ve got every right to try, too.

I nodded in his direction. May the best man win.

And I meant to win.