Our prompts for this story were persuasion, it was a close thing, Chinese food, and suddenly sunshine. We thought about a couple arguing about whether or not to have Chinese food. We both drew upon our early dating history to flesh out the disagreements between them. Then we wondered, what if one of them was a weather witch? This is the story that unspooled from there. 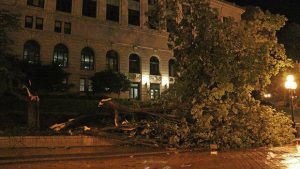 “I’ve always wanted to see Celtic Thunder in concert. How did you manage to get tickets, Andrea?”

“My aunt dates one of the guys in the group.”

They heard a rumble reminiscent of the sound effects from the concert.

Andrea giggled and nudged him with her elbow. “Sounds like someone’s hungry.”

“Yeah, I had to finish fixing a client’s computer problem before the concert, so I ended up skipping lunch. He had an issue with his mailer daemon. The damned thing wouldn’t behave.”

“Ugh, I’m sorry, sweetie. That doesn’t sound fun at all.” Brightening, she threw an arm around him and leaned in to kiss his cheek. “Let’s feed that daemon” She poked his tummy. “you’ve got in your belly then. How does chow mein sound? I know this great place just around the corner.”

Jake rolled his eyes. “Chinese again? We’ve had it three times this month already. And it’s only the tenth.”

She ran a finger down his arm, giving him her most seductive look. “Are you sure I can’t persuade you?”

He laughed and shrugged off her attempt to persuade him.

Pretending to twirl an imaginary handlebar mustache, he said in his best comic book villain’s voice, “I’m immune to your wiles, vixen. You won’t confound me this time!”

Andrea put on a pouty face. “I suppose you want pizza. Again.”

“You always want pizza. You’d eat it for every meal, if you could.”

She looked him up and down before continuing.

“You’re not a teenager anymore. One of these days, you’re going to blow up like the Goodyear blimp.”

He stepped several paces away from Andrea. “Hey! That’s not very nice. You don’t hear me saying things about your looks, do you?”

The temperature dropped as clouds obscured the sun.

Andrea narrowed her eyes at him.

“No, and you won’t either, if you know what’s good for you.”

Jake’s stomach took the pause in conversation to rumble once again.

Sighing, he began, “So what about that pizza…?”

Andrea balled up her fists, screaming, “I. DO. NOT. WANT. PIZZA!”

A wind shrieked past him, nearly blowing him off the sidewalk and into the large oak tree they were passing beneath. He’d barely gotten his bearings when a massive lightning strike momentarily blinded and deafened him.

Blinking away the spots in front of his eyes, he saw Andrea standing several feet away, fists still planted on her hips, fuming.

“You can’t….” He paused, hearing an ominous cracking noise overhead.

Craning his neck, Jake peered up through the branches. His eyes widened.

He leapt for Andrea, tackling her and tumbling them both into the street. Behind them, a huge tree branch smacked into the cement. Right where he’d been standing.

Jake’s voice broke as he spit out, “That…that was a close one! We could have been killed.”

Andrea stood, dusting herself off. “I would have been fine.”

Jake glared at her, pointedly ignoring the ever increasing booms of thunder.

“Fine!” Jake threw up his hands. “We can go for Chinese then.”

He’d no sooner gotten the words out when the clouds parted, bathing them both in bright sunshine.

Jake rolled his eyes. Shaking his head, he muttered, “My mother was right. Never date a weather witch.”