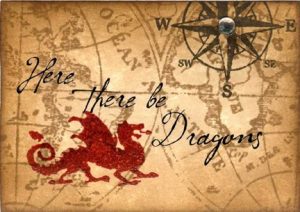 Their maps proclaimed the land and sea.

Their boundaries fluid and maybe

But their information, not adequate,

Forgot one was but myth.

In present day, maps are huge

With fjord and causeway and island.

If ever you need a harbor or refuge,

Cities and towns and burgs are dots.

Highways, roads and streets are lines.

Mountains and forests are squiggles and jots.

All elements bearing their own signs.

Imagine a child in some distant future

Finding our maps in colors so bold,

Folded or in atlases sewn by suture,

If the seas have risen or lands have burned out,

The nations of old would be in doubt.

That future child would perhaps scrawl

“Here Be Dragons” across them all.