This week, we had five prompts, more than our usual.  They were: Vacation, Mysterious note, I can see this one coming, Third chapter, A dip in the lake.

You wouldn’t think a short story would require much research, let alone scouring Google Maps. But that’s what we did when writing this story. We had to find just the right place for a perfect vacation destination.Then as the story progressed, we moved the location slightly so it was close to a three-star Michelin restaurant.

Usually, before we post a story to our blog, we do a quick edit, giving it a little polish. Sometimes an edit will cause the stories to evolve. This one evolved significantly. When we originally wrote this story, it came in around 550 words. Once we finished polishing? It was over a thousand. The story is much better for it. We hope you enjoy our little Far Out Vacation. 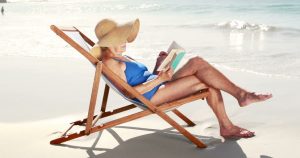 Miriam stretched in her chair.

“The French Riviera was exquisite.” She touched her companion’s hand. “Jack and I saved for three years to afford that vacation. But let me tell you, those last few days were brutal! All I could think about was how I wasn’t ready to go back to work and how I would give anything to stay another week. But we were out of money, so what could we do?

Her companion nodded, encouraging her to continue.

“We had this beautiful little cottage, right on the corner of a lake. We lived so decadently while we were there. We ordered food delivered almost every night the first week. Twice we got really dressed up and went to this incredible three-star restaurant in Marseille. The food was heavenly!”

Miriam pulled a bottle from the bucket of ice and refilled her wine glass.

Putting her hand to her mouth, Miriam blushed and lifted her wine glass. “I’m sorry, I don’t usually gossip like that. It’s the wine talking.”

She took a deep breath and set the wine glass down on the table. “Anyway, what was I saying? Oh right, being nude all the time. Let me tell you, it’s very freeing to walk around in the daytime, both inside and outside our cabin, right there in our own little piece of paradise.” She mock-fanned herself. “It was quite…arousing.”

Miriam giggled, her face going redder. “But one thing I should have seen coming and that I definitely don’t recommend, is making love on the beach. We learned that lesson on the first day. Sand. So much sand. In so many inconvenient places. It may look soft and inviting, but I was still finding places where it was stuck to me the next day!”

She picked up her wine glass and took a sip. “Are you sure you don’t want any?” she asked.

“Fine, more for me.” She took another long sip.

“Where was I?” She snapped her fingers. “Sex! Those first few days. Whew,” she said, clutching her chest, “they were almost as good as when Jack first got home from the Navy after nine months at sea.

“So anyway, after those first few days of bliss, we finally put some clothes on and ventured out to the lodge for supplies. While we were there, I bought this thin little science fiction paperback.” She laughed. “It had this trashy cover with a woman being held in the arms of an alien. I’ve seen bodice rippers with less sleazy covers. Lordy! The story had aliens and humans having sex to create a new race that was going to save the galaxy.” She shook her head. “Like humans and aliens would be genetically compatible, right?”

Her companion snorted a laugh.

“I only got the thing because Jack had been swimming for an hour every day to develop what he called ‘a smooth swimmer’s physique’ and I wanted something to pass the time.”

Miriam laid a hand atop her companion’s. “Thanks for letting me prattle on. You’re such a good listener.”

“So where was I? Oh yes. I was talking about that book I bought. So it was…the day before we were supposed to leave, I think, before I even opened the darn thing. It was just too nice and warm and comfy to bother with putting my reading glasses on.” She made a sour face. “I hate those damned things. Especially when the sun turned me into a gigantic ball of sweat. You know, it’s really hard to read when you have to keep shoving your glasses up your nose every couple of minutes. I’d finally get frustrated and just give up and take a dip in the deliciously deep blue waters of the lake to cool off.”

She shivered at the memory. Her companion echoed the motion.

“Anyway, that morning, I cracked that baby open and was determined that I was going to finish it before we left.”

She took a gulp of her wine.

“Then the strangest thing happened. I turned the page after a finishing the third chapter and this mysterious note tumbled out onto my chest. I remember thinking that it must be a love note from Jack, but it wasn’t. It was written in this very precise style, totally unlike his chicken scratch handwriting,” she said waving a hand in her companion’s direction.

“But no, Jack must have been pranking me. He must have gotten someone to write ‘Don’t go in the lake today’ on a piece of paper and then stuck it in my book. He always hates it when I go in the water with him. Claims I’m ‘too distracting,’” She made air quotes around the words. “when he’s trying to exercise. I should have seen it coming. I’m surprised he hadn’t done something like that to discourage me sooner.”

Miriam smirked and let out a half-laugh.

“Nobody tells MIriam Delgado what she can or cannot do.” She waggled a finger in the air to accentuate her point. “So, I took off my bathing suit and waded into the water. It felt cool after lying in the sun all morning. Jack had swum pretty far out. He stopped exercising, treading water to watch me. So I thought ‘what the hell’ and put on a show for him. I turned, then struck a pose, before diving in.”

She took a healthy swig of wine.

“I always keep my eyes open underwater. I love how the sunbeams slant down through the water. Then it happened. One ray swept toward me. I remember briefly wondering why it was moving before I felt myself turned upside down.”

Miriam leaned over and kissed her companion fiercely.

“But I’m glad it did. I miss my husband, but you guys treat me like a queen. And it turns out that book was right, you aliens do have some pretty inventive sexual techniques.”