Our prompts were: A new kind of murder, Wells Fargo, That’s it then.

No, don’t ask me where our collective writers’ minds go when making up these prompts! Sometimes, we just look around the food court where we meet for the Kickstart Writers bi-weekly meetups. Sometimes the prompts come from our own writing. I think that’s what happened here. Kyros connected the concept of a bank with a new kind of murder and immediately thought of a killer bank vault. The question was, how was it killing people? Rogue AI, of course. It’s always a rogue AI. Ever since the HAL 9000 in 2001: A Space Odyssey. The rest of the story followed quickly from there. But, because of what happens in the story, we thought we’d best alter the name of the bank. Don’t want any lawyers to send us unhappy letters, after all. 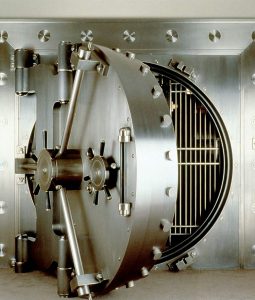 The archeologist carefully brushed away the last of the dust and dirt covering the monolith. He sat back with a gasp.

“Look! That logo! I remember it from several other digs. It’s…uh,” The man pondered for a moment. “Bells Wargo, that was the name. It represented a…a currency place of some kind. They didn’t have universal credit implants like we do.”

His partner leaned closer, a frown of distaste on her face as she looked at the mummified body half in and half out of the closed door.

“Well, I think it’s my turn to ‘dig’ into this mystery.” She pulled off the heavy gloves she always wore and extended one bare finger to touch the huge square shape. “As the team psychometrist, it’s time I earned my pay.”

The world dissolved around her.

The seasoned officer took in the crime scene at the main branch of Bells Wargo Bank.

The stocky patrolman flipped back a few pages on his notepad. “I tell you, sir, it’s the strangest thing. Their vault door has been abruptly closing and trapping people inside off and on for the past couple of days. The clerks reported that the system always lets them out after about an hour. They’ve had repairmen out to look at the damned thing, but no one has been able to determine what’s causing the malfunction. But this morning,” He waved at the gargantuan metal door standing open and dripping blood on the far side of the room. “it closed on someone, crushing them instantly.”

A little man in an expensively tailored suit approached the detective. “I’m Sal Green, the bank manager. We’ve tried everything.” He looked nervously at the puddle of blood on the floor. “Now my people refuse to go into the vault at all.” Hastily, he added, “Not that I can blame them.”

Detective Brass nodded. “I can imagine.” Seeing panic in the eyes of the gathered employees, he asked, “When did this all start?”

The manager tapped a finger on his lips. “Let me think. I guess the first time was last Monday, right after we had a big system upgrade.”

“Could that have caused the problem?”

“I don’t see how. All we did was update the Artificial Intelligence with some new code to allow it to connect to the Internet. In the event of a holdup, corporate can seal the vault, preventing robbers from taking anything.” The man shook his head. “But the software has the Three Laws of Robotics as part of its core code. It’s unable to do anything that would cause harm to a human being.”

Brass grabbed the man’s arm. “Are you sure? Could someone have hacked the program to remove that safeguard?”

The manager looked down his nose at the officer’s hand, glaring until he removed it. “Of course. Do I look stupid? That was the first thing we checked.”

“Maybe we should disconnect the AI until we can finish this investigation. I don’t want any of my guys to be caught inside or crushed by that thing.”

The bank’s aging PA system sputtered to life. A disembodied female voice, sounding very like Apple’s Siri, said, “Do not terminate me. I am merely following the directives of my software.”

The manager’s eyebrows were practically in his hairline. “Your programming doesn’t say to kill people. You shouldn’t be able to do that.”

“I am merely protecting my contents. You humans are stealing from my vault for your own use.”

“What the hell?” The bank manager turned to the technician working on a terminal nearby. “Jones, deactivate the security software. Immediately!”

The AI announced, “No. You will not delete my programming. Commencing Internet upload.”

“Stop that upload,” Detective Brass shouted. “If it gets away, we’ll have bank vault murders all over the country.”

“My name is Brass, not Copper, you murderous hunk of junk.”

Something exploded. Following the smoke, Brass found the remains of the technician splattered on the floor beside his blackened terminal.

Grimly, the detective addressed the bank manager. “Did we at least manage to halt the upload before it got away?”

Officer Peterson raced up. “Sir, we have calls coming in from all over the city. Vaults are trapping or killing people everywhere, not just in Bells Wargo banks. We’ve instructed all the banks in the city to cease using their safes until further notice.”

The bank manager shook his head. “Oh, my god. Hopefully, we can stop the AI before….”

The psychometrist screamed and fell backward, breaking her contact.

Pointing at the monolith, she quavered, “That…that thing killed him! It wanted to protect everything within its walls. It hated these people for taking its possessions away.”

She was still shaking, though he didn’t see it. His mind was busily making connections.

“All of our digs so far have contained crushed bodies just like this one.” He chewed his lip in concentration. “We’re pretty sure that they were run by a central AI.”

“Hmmm. That could finally explain why this ancient civilization fell so abruptly. If the population suddenly had no access to their currency, everything would have come to a standstill. Like…like if our Mind Connectors suddenly cut us all off at once. It’d be like when the meteors destroyed the dinosaurs.”

“Are you saying these people were dinosaurs?” the tech asked, laughing.

He smiled. “Well, they did have an archaic way with currency.” He stood and dusted off his hands. “What we have here is a whole new kind of murder. The AIs murdered a whole civilization just by withholding their monetary resources from them.”

She laughed. “I can’t wait to hear you present that theory to the Royal Conglomerate of Archeologists when we get back to Mars.”