When these prompts, Cavemen with computers; A dynasty of dinosaurs; Pools of light, rivulets of shadow, deserts of dark, came up, we struggled to figure out how to have cavemen with computers. Outside of some very weird Geico commercials, that’s not something you encounter every day. But drawing on our shared history of working for large companies in so-called cubicle farms, we hit upon the idea that morphed into the story you are about to read. Kyros had way too much fun crafting the spell they used. Orion wishes there was a video of him reading it. You would probably all laugh just as loud as she did. Maybe next time she’ll sneak a recording and share it with all of you. 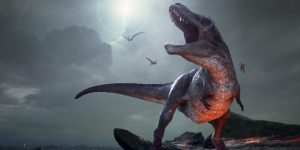 Oh, crap, what did I do now? I mentally went over the checklist of my duties. I already filed the meeting reports, contacted the affiliates, and ordered his lunch. The budget isn’t due until next week. What could he want? Another roar jostled me out of my thoughts. I tiptoed into my boss’s office.

Behind the vast expanse of desk, Mr. Rex Saurus sprawled on his office couch, an ever-present snarl contorting his long face. I used to envy all those sharp teeth, that is, until I caught a glimpse of his dental bill.

“Y…yes, sir?” Dammit, why did I stutter? Not a good way to impress the boss.

His short arms jerkily waved a sheet of paper at me.

“This report on the Stegosaurus Housing Project is incomplete and the numbers don’t add up!” He frowned down at me. “Do I need to replace you with someone more…precise?”

“You’d better, Arroh, or….” He left the threat hanging in the air. We both knew what happened to the last human who did this job: he got early retirement…in the boss’s stomach.

Carefully avoiding his large muzzle, I snatched the report and scurried out of the office.

Graah was leaning on my desk when I came out.

“We still going to lunch today? I know this great new place. It serves the best woolly mammoth burgers.”

Dropping into my chair, I groaned, “I wish.” I shook the sheaf paper at him. “I have to redo the Stego Housing Project report for,” I nodded over my shoulder, “Mr. Toothy in there. To him, I’m just another caveman with a computer.”

“Threatened to eat you again, did he?”

I rolled my eyes. “Yup. Third time this week. And it’s only Dactylday.”

His eyes darted around the low rock walls of the open office, then he leaned closer to me.

I drew back in horror. Lowering my voice, I hissed, “A spell? You know they outlawed the practice of magic ages ago. Ever since the founding of the Dynasty of Dinosaurs.”

I hastily forced a smile onto my face, waving as Ms. Veloci Raptor, the company accountant, stalked by.

“Tell Mr. Rex I’ll have the budget ready for him by lunchtime tomorrow, Arroh.”

Once she was out of earshot, I whispered, “We aren’t allowed access to spells.”

I glanced around quickly. I don’t think anyone overheard that. Thank goodness for small miracles. I leaned closer to him. “Just stop talking! Do you want to get me chomped?”

“Well, if you’d gone to lunch with me, we could have discussed this in private,” he said with indignation. “If you change your mind, meet us after work. At the Neanderthal Nightclub.”

Without another word, he stalked off.

Crap! I’m no revolutionary! I keep my head down so it stays attached to my shoulders. Those rabble-rousers are gonna get us all killed. If we humans didn’t have such dexterous hands, the dinos would have made us extinct a long time ago.

At the club, Graah introduced me to his ‘study group’. They watched me intently as I took the piece of parchment from Graah and scanned the words of the spell. It was pretty standard stuff. Holy shit. Do they understand what this spell will do?

“This…this would…extinguish all life on our planet. Not just our dinosaur overlords, but us too.”

Graah nodded. “Yeah, that’s what we thought it would do.” He chewed his lip. “You have to admit, it would be better to erase everything and start over than to keep on being slaves the way humans are now.”

Is it better to be dead than a slave? I closed my eyes for a moment.  Maybe some humans could survive. After all, we are more adaptable than the dinos, them being cold-blooded and all.

Opening my eyes, I nodded, reluctantly agreeing with them.

“Let’s go back to my place. I need supplies.”

I sketched a large circle on the ground. It was time. I took a deep breath, then began chanting the words from the scroll.

Pools of light from distant star

Bring us stone from darkness far

Deserts of dark bring death to this place

Free us from this oppressive regime.

The gathered group raised their voices in unison, shouting, “Thus ends the tyranny of the dinosaurs!”

As the fiery ball I’d summoned appeared in the night sky, I raised my fist, screaming into the black, “Sic. Semper. Tyrannosaurus!”