Our prompts for this story were: Oh, God, I have no idea and I don’t know whether to pet it or eat it. The last one made Kyros think that there was some kind of magical chicanery going on, similar to what happened in one of our earlier stories, Magical Rapscallions. We both thought it was a good idea to base this story in the same world since we already had a time period and cast of characters to draw from.

You wanna know how much Kyros loves writing these stories? He actually wrote the outline for this one on his cell phone—while waiting in the theater on opening night of Avengers: Infinity War.

“Excellent work, Leonardo! You’ve gotten much better at transmogrification ever since your little, um…,” My master gave me a rueful smile. “mishap with the king’s onions this summer.”

“Thank you, sir,” I said, feeling my face heat up. “It was two weeks before everything stopped tasting like onions. I swore I’d never eat them again after that!”

The old man laughed. “All right, boy. Since you’ve mostly mastered transmogrification, I think we’ll move on to something a little more…interesting.” Donatello stood, straightening his robes. “After lunch.”

“Interesting?” I asked, my eyebrows rising. “What exactly do you consider interesting?”

“Well, what’s the one thing you’ve always wanted to try, but I’ve repeatedly warned you against?”

I couldn’t believe what I was hearing. “Summoning? Really?” I was bouncing on my toes now. “Do we have to wait until after lunch? I’d rather try it right now.”

He quirked up an eyebrow at the suggestion. “You should eat first. You know, keep your strength up.”

“Very well. If you insist.”

Donatello waved his wand, clearing away the twigs I’d practiced changing into swords and then back again.

Leo’s stomach grumbled quietly. Shush, you. I’ll sneak something from Angelo and feed you soon enough. But I’ve waited years to learn summoning, I can’t wait any longer!

“Now, don’t forget, there are very real risks involved in summoning. But you’ve worked very hard and you’ve shown that you possess the discipline necessary to perform complex rituals. So, we’re going to start with a simple calling.” He wagged a finger at me. “And before you ask, no demons or anything that could be hazardous.”

“Then what should I summon? A sprite? A leprechaun?” I thought for a moment. Snapping my fingers, I shouted, “I know, a genie!”

“Let’s not do that, okay?” he said hastily. “I’d rather you beckon a demon than a genie. At least with a demon you’ll know you’re in danger before you wind up dead.”

I stuck my lip out. “Well, fine. Then what would you recommend I try to summon?”

Donatello tilted his head while stroking his bearded chin. “Something simple.” He shot a glare in my direction. “Something safe.” Then the old man’s face lit up. “I know! A puppy.”

My eyes widened. “Oh, that’s a great idea! I’ve always wanted a puppy. How do I get started?”

“For this first working, we’ll use my spelling circle, but in the future, you will need to build your own.” The mage touched his wand to the inlaid silver on the floor, causing the markings to blaze with power.

“Use your wand to add your personal sigil to the circle,” He pointed to an empty loop on the outer part of the diagram. “then concentrate on what you want to bring forth. Be as specific as you can about the type of dog you want, its color, and so on. When you have the image firmly fixed in your mind, point your wand at the center of the circle and issue the command: advocabit.”

I went through the relaxation and concentration exercises that Donatello had drilled into me.

I raised my wand.

“Advo-” My tummy chose that moment to rumble, louder this time. “Cabit!”

Sitting in the middle of the circle was a tiny brown dachshund…wrapped in a bread loaf. With creamy sauces smeared all over the top.

Donatello leaned in, peering at the strange creature.

“Great Zeus! What have you done?”

“I don’t know,” I replied helplessly. “I was thinking about a puppy. Then my tummy rumbled….”

The old mage shook his head. “Did you think about food?”

I took a deep breath. “Yeah…. But just for an instant.”

“And that’s all it takes, Leo. You have to stay focussed or something like this….whatever in the seven hells this thing is, happens.”

Donatello shrugged. “Honestly, I don’t know. I can’t decide whether we should pet it or eat it!”

Desperate to redeem myself in my master’s eyes, I asked, “How do I prevent this from happening again?”

Donatello chuckled. “Ah, yes! Let me share with you one of the first pieces of advice that my master passed on to me.” The wise, old mage leaned close and winked, his voice dropping to a conspiratorial whisper. “Never, ever, practice magic on an empty stomach.” 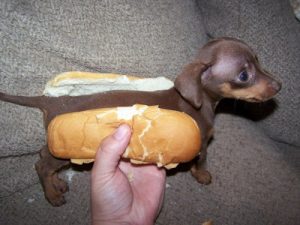