The prompts for this one were unusual. Instead of several words to work with, we only had the word Moonglow and a newspaper photo of trotters in a race similar to the one below.

We did a lot of research on this one. First, we tried to place the story at an actual racetrack, which led us to research the history of harness racing. Then when we considered using the mobile starting gate, we fell down another rabbit hole looking into when they came into use, to make sure that we weren’t creating an anachronism. Finally, we gave up and created our own racetrack and stakes race because we couldn’t find enough information to be 100% sure. But it was fun researching all those details to make the story come to life. That’s way research goes sometimes. You spend hours trying to get all the details just right…then use none of it in the actual story. But in doing the research, you get a feel for the material that shows up in little things (for example, Kyros didn’t know that the buggies behind the horses were called sulkies).

Watch out for some Easter eggs we hid in the story, too. 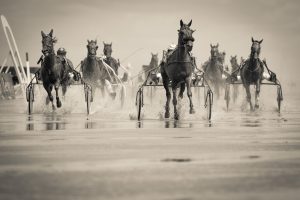 Photo by Martin Damboldt from Pexels

The young man in the stall turned from grooming his horse. “Yeah. What can I do for you?” he called over the half-open dutch door.

The other man reached out to stroke the chestnut mare’s muzzle.

“Careful,” Simpson warned, “she bites if she doesn’t know you.”

The stranger snatched his arm back just as the horse lunged in his direction. Clutching his hand to his chest, the man glanced down to verify he still had all his fingers.

“Yikes, she’s quick!” he said. “I’m Baker, by the way.” He released the grip on his hand, giving a half-wave. “She’s a bay, right?” Without pausing for an answer, he continued, “What’s one a’ these go for, anyway? How long have you been riding her? And aren’t you kinda tall to be a jockey?”

Blinking at the rapid-fire questions, Simpson drawled, “Moonglow’s a chestnut trotter and she’s worth about seventy-five big ones.” He gave a quick shake of his head. “And I’m not a jockey, ‘cause you don’t ride trotters, you get pulled behind them in a sulky.” Seeing the man’s confused look, he added, “It’s a kind of a buggy.”

Simpson began running a cloth over his horse. “But to answer your other question, I’ve been driving her for just over a year now.”

Baker whistled. “Well, she’s sure beautiful.” He tilted his head toward the racetrack. “You in a race today?”

“Nope. Getting her ready for the Broquen Downs Invitational tomorrow.” Simpson put the rag in his grooming bucket and left the stall. “She’s the odds-on favorite to win.”

“Is that right?” Baker said, backing out of Simpson’s way. “‘Cause my boss,” His face darkened. “thinks you should sit out this race. See, his horse’s racing tomorrow too and he’ll make a bunch moolah if his horse wins.”

Simpson grabbed two flakes of hay and stuffed them into Moonglow’s haynet. Turning back to Baker, he scoffed, “Sorry, buddy. Moonglow and I will leave all those other horses in the dust and there ain’t nothing you can do about it.”

The announcer’s voice boomed over the loudspeakers. “Good afternoon. It’s a gorgeous August day here at Broquen Downs, the oldest harness racing track in the world. The ‘57 Invitational Stakes for three-year-olds is just about to start.”

Down on the track, Simpson lined Moonglow up in the Number Two position behind the mobile starting gate. When Number Three pulled in, he shook his head. Baker, his visitor from the day before, was driving the second favorite, a gray named Whispers.

“I didn’t take you for a driver.” Simpson’s eyes narrowed. “Huh. So that means you knew who Moonglow was when you showed up yesterday.”

Baker saluted Simpson with his whip. “Yup and the boss told me your nag there is a mudder. But today’s beautiful, so I guess you don’t gotta drop out after all. I’ll win this hands down.”

Suddenly, a cold wind blew across the track. Dark clouds began rolling in from the horizon. Thunder rumbled, startling several horses. Sheets of rain began falling from the sky.

“Looks like my luck has turned,” Simpson shouted over the sound of the storm.

From the loudspeaker, the announcer’s voice bellowed, “Rain delay. All drivers return to your barns.”

Half an hour later, the storm had passed and the drivers were again lined up behind the mobile gate, speeding toward the starting line.

They’d barely hit the first turn when several horses lost their footing on the sloppy track and unceremoniously dumped their drivers in the mud. Out of the corner of his eye, Simpson caught sight of Baker careening into the fence as Moonglow surged to the front of the pack.

The announcer cheered, “And it’s Moonglow for the win, by ten lengths, with Serenity in second and Tempest Rising in third! Sadly, the second favorite, Whispers, finished out of the money.”

A few minutes later in the winner’s circle, Moonglow’s owner, Nathan Reynolds, approached Simpson. Clasping his driver on the shoulder, the big man boomed, “Good work out there, Simpson.”

The young man beamed up at his boss. “Thank you, sir. Moonglow was at the top of her form today.”

Reynolds glanced around, then lowered his voice. “What happened? Why’d you change the plan? I thought we agreed….”

“That asshole Baker. The guy I told you about who stopped by yesterday?” Simpson made a sour face. “Turns out he was Whispers’ driver. And since Whispers is a terrible mudder…I guess I got lucky that it decided to rain on Baker’s parade.”

Stalking toward the winner’s circle, the aforementioned Baker pointed at him and shouted, “I know you cheated, Simpson. If I ever figure out how, I’ll….”

A brilliant flash of light and deafening thunder drowned out whatever else Baker had been about to say. When things returned to normal, Baker was flat on his back several feet from where he’d started, steam wisping from his singed racing silks.

His boss glared at him.

Simpson shrugged his shoulders. “C’mon, Mr. Reynolds, I was just horsing around.”

The man buried his face in his hand. “Did you have to…?”

“Yeah, I did.” Simpson nodded. “Never ever piss off a weather wizard.”

So, did you catch our Firefly references? Some of the characters and horses had very familiar names. And, this isn’t our first story involving a weather witch. Who knows? Maybe Simpson is the grandfather of the girl from Weather The Storm.